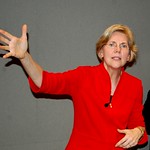 Elizabeth Warren
(Image by mdfriendofhillary)   Details   DMCA
President Donald Trump responded to Sen. Elizabeth Warren's Monday announcement that she is forming an exploratory committee for a potential 2020 presidential run. "Well, that I don't know," Trump responded. "You'd have to ask her psychiatrist." The president also mocked the Democratic senator from Massachusetts, who he has repeatedly called "Pocahontas," because of her claim that she is part-Native American. "Elizabeth Warren will be the first," Trump said, referring to Warren being the first major Democrat to throw her hat into the ring. "She did very badly in proving that she was of Indian heritage. That didn't work out too well."
Read the rest of the story HERE: