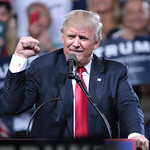 As Trump, flanked by nearly 20 Christmas trees, went through the timeline of him winning several states early on in the night, the president-elect said the media were in a 'state of panic.' 'Now they’re getting nervous on television, and you see these anchors they're like sweating and crying and throwing up all over the place,' Trump said, claiming that John King's hand was beginning to shake as he updated CNN's election night map. 'All those months he’s saying there is no path to 270 for Donald Trump. 'He’s up with the red [map], and he’s going and his hands start to shake, and he’s gasping for breath, he can’t breathe, he’s choking like a dog,' Trump said.