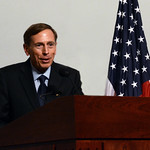 President-elect Donald Trump met Monday with retired Army Gen. David Petraeus, a possible alternative choice for secretary of state amid an escalating feud over the position between supporters of former New York mayor Rudolph W. Giuliani and 2012 GOP presidential nominee Mitt Romney, who will sit down with Trump on Tuesday. As Trump’s senior advisers battled over who should fill what is considered the most prestigious Cabinet post, the president-elect will hold a second session with Romney along with another possible option, Sen. Bob Corker (R-Tenn.), aides said Monday. Corker, who will visit Manhattan’s Trump Tower on Tuesday, chairs the Senate Foreign Relations Committee and had suggested publicly that he was unlikely to be chosen.