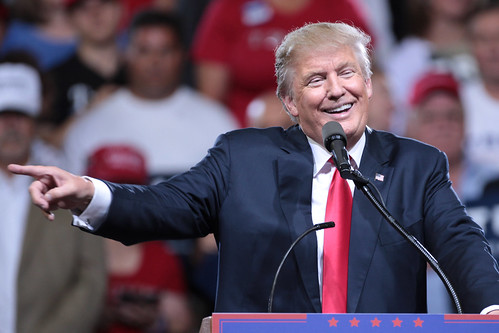 Donald Trump
(Image by Gage Skidmore)   Details   DMCA
Sens. Kelly Ayotte (R-N.H.), John McCain (R-Ariz.) and Marco Rubio (R-Fla.) are all in a difficult spot because they are running against primary opponents who have embraced Trump's populist stances and rhetoric. McCain’s primary opponent, Kelli Ward, has embraced Trump in her effort to topple the five-term incumbent. She has pledged to support Trump's proposed Supreme Court nominees and attacked McCain for voting in the past for justices selected by Democratic presidents, such as Ruth Bader Ginsburg. While Ayotte and McCain have stopped condemning Trump in broad terms, it hasn’t gained them much in return. Trump refused to endorse either of them until late Friday, when he finally relented, telling an audience in Green Bay, Wis., "I need a Republican Senate and a House to accomplish all of the change we have to make."
Read the rest of the story HERE: