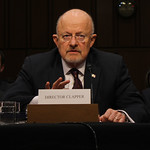 James Clapper
(Image by Medill DC)   Details   DMCA
James Clapper, the former director of national intelligence, issued his harshest rebuke of President Donald Trump on Wednesday, questioning the president's fitness for office. Trump shot back on Thursday, calling Clapper a liar and implying he is a hypocrite. The president's tweet was most likely provoked by Clapper's comments on CNN following Trump's campaign rally in Arizona on Tuesday night, which the veteran intelligence official called "downright scary and disturbing." "I really question his ability to — his fitness to be in this office, and I also am beginning to wonder about his motivation for it," Clapper said. "Maybe he is looking for a way out."
Read the rest of the story HERE: