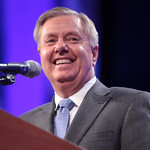 Lindsey Graham
(Image by Gage Skidmore)   Details   DMCA
After completing his whirlwind transition from John McCain bestie to Donald Trump acolyte, Sen. Lindsey Graham of South Carolina is set to assume one of the most important positions related to Trump’s survival: Chair of the Senate Judiciary Committee. Graham’s new post will give him a key role in deciding how the Senate Judiciary oversees the special counsel’s investigation into Russia’s interference in the 2016 election. He has reportedly already met with Trump’s new Acting Attorney General, Matthew Whitaker, and apparently left satisfied that the Mueller investigation wouldn’t be impeded.
Read the rest of the story HERE: