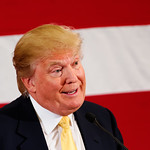 Donald Trump
(Image by Michael Vadon)   Details   DMCA
President Trump on Thursday retreated further from his threat to close the southern border, instead saying he would slap auto tariffs on Mexico within a year before closing the border in an attempt to stop drug trafficking and illegal immigration. “You know I will do it,” Trump told reporters in the Cabinet Room. “I don’t play games.” Trump described his newest threat as a “one-year warning” to the Mexican government to stem the flow of drugs and migrants traveling through its country en route to the U.S.
Read the rest of the story HERE: