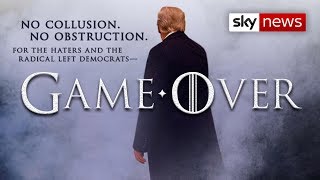 Donald Trump .tried to get Mueller fired. No collusion. No obstruction..
(Image by YouTube, Channel: Sky News)   Details   DMCA
President Trump is venting frustration with associates who cooperated with special counsel Robert Mueller’s investigation after their notes and first-hand observations were used to paint a negative and damaging picture of his presidency. Even as the White House reveled in what it saw as a generally positive news cycle in the hours following the release of the Mueller report, Trump made his dissatisfaction clear. Some of the statements about him in the “Crazy Mueller Report” are “total bullshit & only given to make the other person look good (or me to look bad),” he said.
Read the rest of the story HERE: