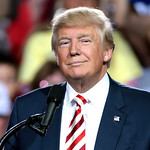 Donald Trump
(Image by Gage Skidmore)   Details   DMCA
President Donald Trump’s campaign raked in $30 million in the first quarter of 2019 and had more than $40 million cash on hand, amassing a record war chest and far outpacing the field of Democratic candidates heading into the 2020 race, according to the campaign. Combined with $46 million raised by the Republican National Committee, the full Trump re-election effort is expected to have a grand total of $82 million in the bank, with the campaign doubling what it had at the end of last year. Trump's total is more than the top two Democratic candidates combined — Vermont Sen. Bernie Sanders, who pulled in $18.2 million for the quarter and California Sen. Kamala Harris, who took in $12 million.
Read the rest of the story HERE: