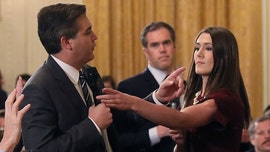 Trump Administration counters CNN, Jim Acosta lawsuit
(Image by foxnews.com)   Details   DMCA
The Trump administration on Wednesday pushed back against CNN's request to immediately reinstate reporter Jim Acosta's press pass, arguing that reporters do not have a Constitutional right to enter the White House. CNN on Tuesday sued the Trump administration over Acosta's credentials. CNN argued that revoking them violated the reporter's First and Fifth Amendment rights to free speech and due process, respectively. The legal actions have ratcheted up Trump's long-running feud with the news media and could test the limits of his ability to crack down on reporters whose coverage he does not like.
Read the rest of the story HERE: