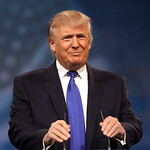 Donald Trump
(Image by Gage Skidmore)   Details   DMCA
The border-security standoff between Mexico and the United States ended Friday, with an agreement that averts tariffs on vegetables, car parts, refrigerators, tequila and other imports that would have walloped both countries beginning Monday. “I am pleased to inform you that The United States of America has reached a signed agreement with Mexico,” President Trump tweeted in announcing the pact Friday night. “The Tariffs scheduled to be implemented by the U.S. on Monday, against Mexico, are hereby indefinitely suspended,” the president’s tweet said.
Read the rest of the story HERE: