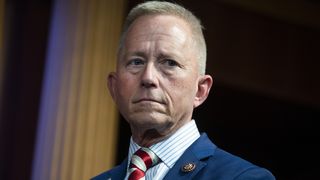 Rep. Jeff Van Drew expected to switch parties, become Republican.
(Image by axios.com)   Details   DMCA
President Trump met with Rep. Jefferson Van Drew (N.J.) at the White House on Thursday and announced that the Democrat would switch parties and become a Republican. “Jeff will be joining the Republican Party,” Trump told reporters in the Oval Office on Thursday afternoon, after teasing a “very big announcement.” Van Drew told Trump he has his “undying support.” “I believe that this is just a better fit for me,” he said. “This is who I am.” The meeting in the Oval Office came one day after the House voted nearly strictly around party lines to approve two articles of impeachment against Trump for abuse of power and obstruction of Congress.
Read the rest of the story HERE: