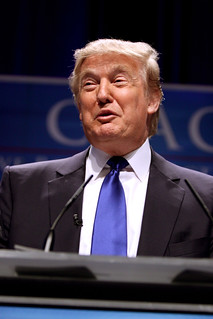 Donald Trump
(Image by Gage Skidmore)   Details   DMCA
Republican Donald Trump rolled to victory on Saturday in South Carolina to solidify his status as the front-runner and Democratic presidential candidate Hillary Clinton beat back a strong challenge from Bernie Sanders in the Nevada caucuses. Trump, who in the final days of the primary battle got entangled in a controversy with Pope Francis, easily defeated Florida Senator Marco Rubio and Texas Senator Ted Cruz, who were fighting for second place and the right to declare themselves the main anti-Trump alternative.
Read the rest of the story HERE: