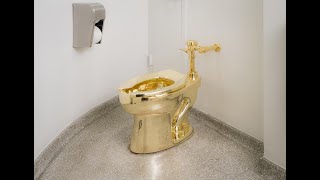 The First Couple had asked NYC's Guggenheim Museum to borrow a Vincent Van Gogh painting for their private White House quarters, but a curator responded that the museum no longer had the work. However, the curator wrote in an email, the Upper East Side museum could offer the presidential couple an interactive work of art: a fully functional toilet made out of solid 18-karat gold entitled “America.” The shimmering art piece, created by Italian-born artist Maurizio Cattelan, is estimated to have cost more than $1 million to make. (File under: "Art in the Service of Social Change."