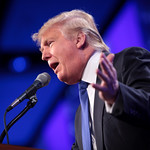 Donald Trump
(Image by Gage Skidmore)   Details   DMCA
Next week, Donald Trump will travel to Brussels for the annual NATO meeting with 28 of his fellow North American and European leaders. Given that the NATO multilateral agreement was signed long before he entered office, the president has spent the run up to the two-day affair trashing the alliance and sending threatening letters to fellow members suggesting he may pull out of the thing unless his ransom demands are met. Europe is just hoping to get through the upcoming summit without any presidential temper tantrums, though the outlook is not good.
Read the rest of the story HERE: