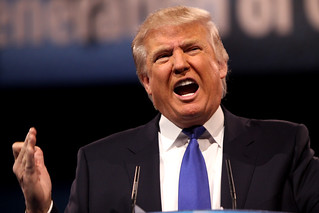 Donald Trump
(Image by Gage Skidmore)   Details   DMCA
Trump’s victory speech in Nevada was the usual unhinged talking points, but the thin skinned billionaire couldn’t resist taking some shots at his own party. Trump is mocking the people who are trying to stop him from winning the nomination. A Republican Party that has been a state of open warfare with itself has found a way to become even more toxic. The door is open for Donald Trump to become the leader of a political party that doesn’t want him to win. Trump isn’t winning the Republican primary. Much like a warlord in a country ravaged by civil war, Trump filling a power vacuum while the GOP destroys itself.
Read the rest of the story HERE: