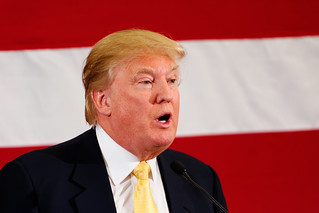 Donald Trump
(Image by Michael Vadon)   Details   DMCA
Trump currently has two scandals brewing, and they both are being fed by his consistent refusal to tell the truth. Trump could make the questions about his tax returns go away if he released them. The “John Miller” story makes Trump look like a complete psycho, but he could have stuck to his earlier comments and played it off as a joke. Donald Trump shouldn’t be president because when he was confronted with the slightest bit of adversity, he hung up the phone and hid under his desk. Trump is an embarrassment to the United States of America.
Read the rest of the story HERE: