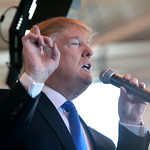 The New York attorney general disclosed Monday that it ordered Donald Trump’s personal charity to cease fundraising immediately after determining that the foundation was violating state law by soliciting donations without proper authorization. The message was conveyed in a “notice of violation” sent Friday to the Donald J. Trump Foundation. The night before, The Washington Post reported that Trump’s foundation — which subsisted entirely on other people’s donations since 2008 — failed to register with the state as a charity soliciting funds. Because of that, Trump’s foundation had avoided rigorous annual audits that New York state requires of charities that seek the public’s money. Those audits would have asked, among other things, if the Trump Foundation’s money had been used to benefit Trump or one of his businesses.