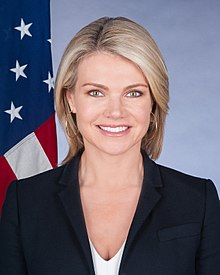 Heather Nauert
(Image by en.wikipedia.org)   Details   DMCA
Trump is considering appointing Heather Nauert, a former Fox News anchor who serves as the State Department’s chief spokeswoman, as the next U.S. ambassador to the United Nations, according to current and former State Department officials. Trump said at a press conference Thursday that Nauert is “under very serious consideration” for the top U.N. job but that a formal announcement wouldn’t be made until next week. The White House declined to comment on the matter. The State Department’s deputy spokesman, Robert Palladino, told reporters on Thursday that he had no information on the matter. Washington insiders were skeptical that Nauert, who joined the State Department in April, 2017, could manage the job with her lack of foreign-policy experience.
Read the rest of the story HERE: