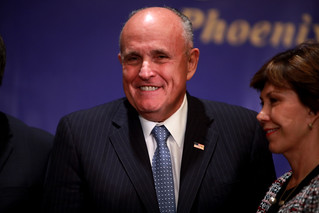 Rudy Giuliani
(Image by Gage Skidmore)   Details   DMCA
Donald Trump wasn’t bluffing when proposed a ban on Muslims entering the United States: This morning, he outlined the mechanism by which he would indiscriminately ban 1.6 billion people from entering the country. While appearing in one of his countless phone interviews with Fox & Friends, Trump floated former New York City mayor Rudy Giuliani as a potential head of the “commission” he intends to create to look into, as he mentions earlier in the conversation, “radical Islamic terrorism,” and the need for “a temporary ban” on Muslims entering the United States. “I’m thinking about setting up a commission perhaps headed by Rudy Giuliani to take a very serious look at this problem. But this is a worldwide problem, and we have to be smart,” he said.
Read the rest of the story HERE: