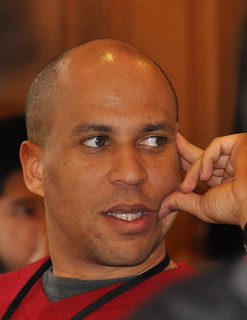 Cory Booker
(Image by veni markovski)   Details   DMCA
Three more Democratic senators announced their support Thursday for the Iran nuclear agreement, increasing the possibility the deal's supporters may be able to block a Senate vote on a resolution disapproving of the pact. The announcements by Sens. Cory Booker of New Jersey, Heidi Heitkamp of North Dakota and Mark Warner of Virginia bring the number of pro-deal senators to 37. President Obama needed 34 to prevent the Senate from overriding his veto of any resolution of disapproval opposing the Iran deal. He had secured that number by Wednesday.
Read the rest of the story HERE: