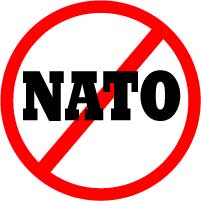 Several thousand supporters of pro-Russian opposition parties protested Saturday against Montenegro's NATO membership, demanding a referendum over the issue.  The protest outside parliament gathered between 2,000 and 5,000 people, according to estimates by reporters and organisers and pro-Russian and pro-Serbian opposition parties.  Following the break up of communist Yugoslavia in early 1990s, Montenegro was allied with Serbia in the Federal Republic of Yugoslavia at the time of an 11-week 1999 NATO bombing campaign in Kosovo.