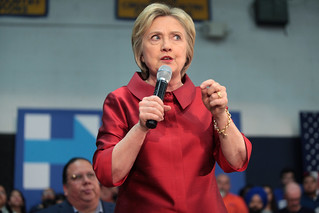 Hillary Clinton
(Image by Gage Skidmore)   Details   DMCA
The elites in Washington almost uniformly believe Hillary Clinton will be elected president in November. The conventional wisdom underlying coverage of 2016 is that Donald Trump will go down in flames and probably take the Republican Senate with him. Trump has a well-documented history of misogyny, xenophobia and demagoguery. He has alienated women, Hispanics, Muslims, African Americans, Asian Americans and Native Americans. He has mocked the disabled, prisoners of war and Seventh-day Adventists. The Speaker of the House and both living former Republican presidents are withholding endorsements. It should be a slam dunk for HRC, right? But, but, but: Six months is an eternity in politics, and we cannot foreclose the possibility that she will botch the fall campaign against Trump.
Read the rest of the story HERE: