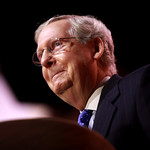 Mitch McConnell
(Image by Gage Skidmore)   Details   DMCA
Less than 24 hours from their planned health care vote, Senate Republicans have no idea what health care bill they’ll vote on, the Wall Street Journal reported — a lack of transparency that’s led to widespread criticism. Senate Majority Whip John Cornyn (R-Texas) said Republicans do not have the “luxury” of letting people know what plan will be voted on before actually scheduling the vote. But Democrats and other opponents of the opaque process Republicans have used throughout the health care reform process don’t buy that.
Read the rest of the story HERE: