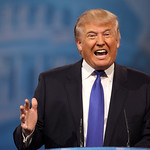 Donald Trump
(Image by Gage Skidmore)   Details   DMCA
In a 5-4 decision Friday night, the Supreme Court lifted a district court’s injunction against President Donald Trump’s efforts to use $2.5 million in military funds to build a wall on the U.S. Mexican border. The five conservative justices voted to lift the injunction, while the four conservatives dissented. Justice Stephen Breyer, one of the liberal justices, concurred in part with the majority’s decision that would allow the administration to re-allocate the funds and finalize contracts and administrative procedures related to the building of the wall. But Breyer would have blocked the actual construction of the wall until the litigation has concluded.
Read the rest of the story HERE: