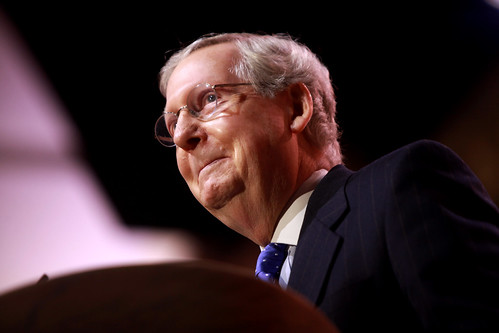 Mitch McConnell
(Image by Gage Skidmore)   Details   DMCA
The Senate will not vote on any legislation to protect US elections from foreign interference, despite the consensus of the intelligence community that Russia will once again seek to hack election systems and manipulate American voters in 2020. The reason, said Sen. Roy Blunt (R-Mo.) on Wednesday, is that Senate Majority Leader Mitch McConnell (R-Ky.) has decided not to bring any election security bills to the floor for a vote. When Sen. Richard Durbin (D-Ill.) asked Blunt whether he was planning mark-ups of any of the several election security bills pending before the committee, Blunt responded that it would be fruitless to advance legislation that McConnell would not allow to come up for a vote.
Read the rest of the story HERE: