Despite cultivating a populist image, the former vice president has spent his career championing policies favored by Republicans and the corporate elite.

The version of “folksy Joe” even touted himself as “labor from belt buckle to shoe buckle.” There’s only one problem with this carefully cultivated image: Joe Biden’s entire career.

In more than four decades of public service, Biden has enthusiastically championed policies favored by financial elites, forging alliances with Wall Street and the political right to notch legislative victories that ran counter to the populist ideas that now animate his party. If he declares for the presidency, Biden will face a Democratic electorate that has moved on from his brand of politics. 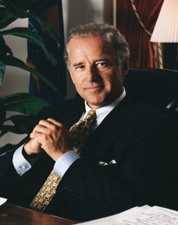