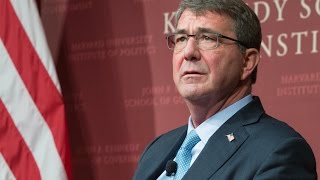 Secretary of Defense Ashton B. Carter
(Image by Belfer Center, Channel: Belfer Center)   Details   DMCA
Defense Secretary Ashton B. Carter repealed the Pentagon’s long-held ban on transgender people serving in the military Thursday, ending a year-long process that was bogged down by internal conflict and concerns among senior service officials about how the change could be made. Carter said at a news conference that the policy change will take place over the next 12 months, beginning with guidance issued to current transgender service members and their commanders, followed by training for the entire military. Beginning Thursday, however, service members can no longer be involuntarily separated from the services solely on the basis of being transgender, he said.
Read the rest of the story HERE: