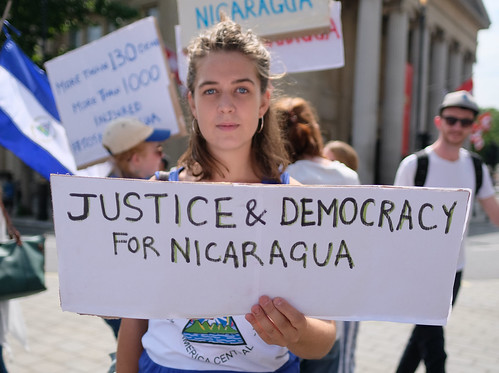 Justice and Democracy for Nicaragua.
(Image by alisdare1)   Details   DMCA

At a recent Congressional hearing, the National Endowment for Democracy, a taxpayer-funded organization, explained that its mission is to spread democracy around the world. Under questioning, its spokesmen revealed the ways they are currently working toward the overthrow of Nicaragua's President Ortega. They named other countries in their long range sites, including China and North Korea. The men testified that they hope Congress will continue to fund their work as they have done for the past several decades. This testimony elicited pushback from a few members, but it also received fulsome praise from others. While this information may be shocking to some readers, the mainstream media apparently have not found it important enough to warrant coverage.

Meredith Ramsay is a political science professor, now retired from UMassBoston, where she also served as Associate Dean of the Liberal Arts Faculty. She is a writer, musician, gardener, and amateur photographer. Her latest book is Community, (more...)