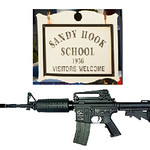 71 More Children Killed By Guns Since Newtown
(Image by Mike Licht, NotionsCapital.com)   Details   DMCA
"Now that the Islamic State has openly called on lone-wolf attackers to take their war to the streets of America, it is a full-blown national-security hazard. All those attackers need to do is to buy a gun and swear allegiance to ISIS’ death cult." "The gun industry lobbyists may be beyond reason, but the lawmakers have a duty to respond to their constituents. Unfortunately, after each new massacre, far too many offer nothing more than condolences and moments of silence. That silence is killing us." "Most of the rest of the world figured this out long ago. But in the United States, the gun industry and its enablers continue to insist that the only solution is more guns, and more bullets flying."

If a law like Sen.Feinstein’s were in place, authorities would have at least a chance of stopping aspiring terrorists from buying weapons.

Other Series: View All 1055 Articles in "Public ignorance & those who use this"