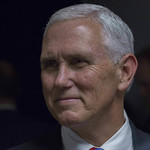 VP Mike Pence
(Image by U.S. Department of Energy)   Details   DMCA
Relying on the libertarian billionaires’ support is nothing new for the vice president. Now Mike Pence and the Koch brothers are working together to pass tax cuts for the wealthiest Americans. In New York City last week, Vice President Mike Pence asked billionaire David Koch and around 100 other wealthy, conservative political donors for help in supporting a Republican tax plan. Since the plan would overwhelmingly benefit the richest Americans — like those he was addressing — Pence probably didn’t need to do much persuading.
Read the rest of the story HERE: