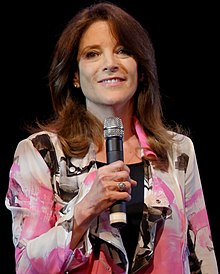 Marianne Williamson: “I challenge the idea that only people whose careers have been entrenched for decades in the limitations of the mind-set that drove us into this ditch are the only ones we should consider qualified to take us out of the ditch.” She had been watching Donald Trump on television, thinking about how different life was now that he was president — the way the country seemed to change overnight, the way the world was barely recognizable. America was newly, starkly, dangerously divided on every issue that mattered. This entire country, she realized, was like an alcoholic family system in which the children just know something terrible is going on.