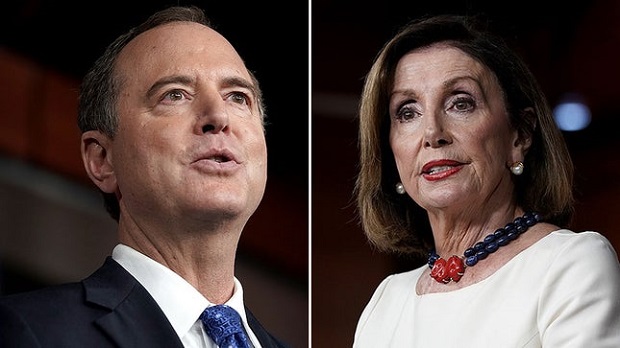 We were presented with the most graphic evidence yet that the president of the United States has betrayed his Oath of Office Rep Adam Schiff (D-CA) House Speaker Rep Nancy Pelosi (D-CA)
(Image by thehill.com)   Details   DMCA

Trump is facing serious threat of impeachment over his dealings with Ukraine and its president Volodymyr Zelensky. Speaker Nancy Pelosi (D-Calif.), a reluctant convert to the impeachment cause, is now spearheading the effort.

Here are the most serious allegations:

The White House sought to hide details of Trump’s phone call -  Trump allies used leverage to get Ukraine to ‘play ball’ -  The White House has hidden the details of other phone calls -  Officials were ‘deeply concerned’ by Giuliani’s activities -  Ukrainian officials knew U.S. aid could be in jeopardy.