While there have been a few highly publicized people who've made false claims about vaccines, decades of research from hundreds of medical, government and nonprofit organizations around the world have proven time and time again that vaccines are safe and effective...

For example, in 2015 the U.S. is experiencing a large, multi-state measles outbreak linked to an amusement park in California. The majority of people who have gotten measles during this outbreak have been unvaccinated. In 2014, the U.S. experienced a record number of measles cases, with 644 cases from 27 states, including a large outbreak of 383 cases that occurred primarily among unvaccinated Amish communities in Ohio. 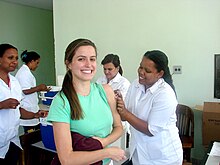