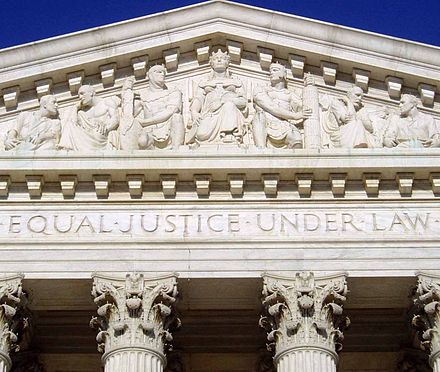 EqualJusticeUnderLaw.
(Image by (From Wikimedia) UpstateNYer, Author: UpstateNYer)   Details   Source   DMCA
Women’s rights activists were jubilant Wednesday after Virginia became the 38th state to ratify the Equal Rights Amendment, finally clearing a key hurdle needed for it to be included in the Constitution. Many more obstacles lay ahead, however, including a hostile Trump administration and a lawsuit from anti-ERA Republican attorneys general. The ERA would amend the Constitution to give women equal standing under the law. It was first conceived of nearly a century ago, but first passed in the U.S. Congress in 1972. It then went out for ratification to the states, three-fourths of which must ratify in order to amend the Constitution.
Read the rest of the story HERE: