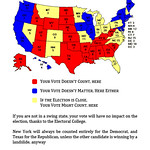 The Electoral College Means Your Vote Doesn't Count
(Image by KAZVorpal)   Details   DMCA
The founders provided a check against the election of a demagogue like Trump. It's time to put the Electoral College to good use by convincing them to vote for someone else. Clinton won the popular vote by over 200,000 votes but lost in the electoral college 306 to 232!
There is a petition to convince the electoral college to vote for Clinton. It has over 2 million signatures in less than 2 days already & should become the most popular petition ever on Change.org.

And 11 states have already passed a National Popular Vote bill that would leave the electoral college but force it to vote the popular will. This is more realistic than changing the Constitution.