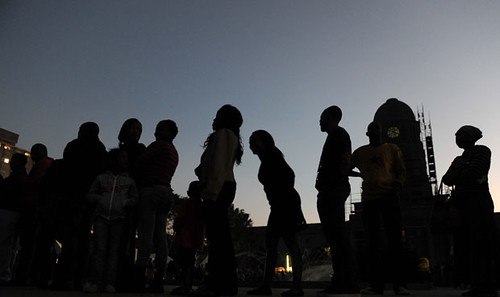 Waiting in line to vote
(Image by GovernmentZA)   Details   DMCA

Remember those heroic Democratic Texas legislators who fled their state to avoid a quorum that would have passed the voter-repressive, racist bill S.B. 1 being pushed through by Republicans (all but one anyway)? Well, the bill has passed in a follow-up session to the one originally boycotted.

The bill, alleged to avoid voter fraud and uphold “election integrity,” “restricts methods of voting, tightens the rules around mail ballots, empowers partisan poll-watchers, and creates new rules and penalties for mistakes by election officials and people helping others vote.”

Facing threats of arrest for having walked out, the Democrats stayed in DC for weeks to publicize their plight to lawmakers and the people and begged for support. The bill passed 80-41 despite their efforts. Read on.

Other Series: View All 91 Articles in "politics in general"