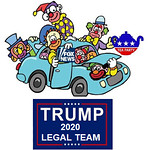 While spending more than most states to uncover voter fraud, and admitting that the few highly publicized cases - 138 from 2004-2020 - may even discourage more people from committing fraud, the crime itself remains vanishingly rare in Texas, or anywhere else. It is certainly too rare to have shifted any state election, where Biden never won by less than 10,000 votes.  Voter suppression, however, disenfranchises millions, every year.  Not even failed lawsuit-filing Texas Attorney General Ken Paxton can outvote that reality.