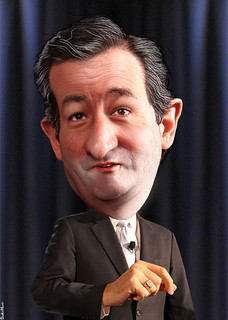 Ted Cruz - Caricature
(Image by DonkeyHotey)   Details   DMCA
But just because Cruz is out of the presidential race doesn’t mean he’s lost his political influence. In fact, as a U.S. Senator with newfound national name recognition, he arguably holds more clout than he did before his campaign. It seems likely he’ll use that political power to push harder for the ultra-conservative agenda he has been touting across the country for more than a year. Such as...Demonize and invalidate Obama’s climate change action plan...Kill criminal justice reform...Block President Obama’s nomination of Merrick Garland to the Supreme Court...and Keep Guantanamo open indefinitely, just to name a few.
Read the rest of the story HERE: