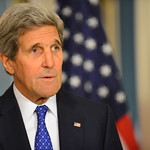 U.S. Secretary of State John Kerry said on Tuesday efforts to end Syria’s war must continue despite Washington’s decision to break off talks with Moscow over what he called its “irresponsible” support for President Bashar al-Assad. The United States on Monday suspended talks with Russia on implementing a ceasefire deal in Syria, accusing Moscow of not living up to its commitments to halt fighting and ensure aid reached besieged communities. “We are not giving up on the Syrian people and we are not abandoning the pursuit of peace,” Kerry said. “We will continue to pursue a meaningful, sustainable, enforceable cessation of hostilities throughout the country – and that includes the grounding of Syrian and Russian combat aircraft in designated areas.”