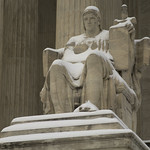 Statue at Supreme Court
(Image by Lorie Shaull)   Details   DMCA
A deeply divided Supreme Court dealt a major blow to the nation's public employee unions Wednesday that likely will result in a loss of money, members and political muscle. About 5 million workers could be affected by the ruling, which overrules the court's 1977 decision in Abood v. Detroit Board of Education — those who pay dues or "fair-share" fees to unions in 23 states where public employees can be forced to contribute. Workers in 27 states cannot be forced to join or pay unions.
Read the rest of the story HERE: