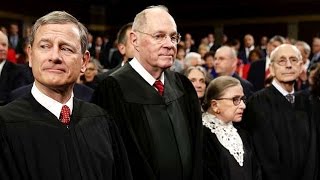 The Supreme Court has a lot of issues, but one area where there's almost NO diversity could be abortion.
(Image by John Iadarola, Channel: John Iadarola)   Details   DMCA
The Supreme Court on Monday struck down parts of a restrictive Texas law that could have reduced the number of abortion clinics in the state to about 10 from what was once a high of roughly 40. Justice Stephen G. Breyer wrote the majority opinion, joined by Justices Anthony M. Kennedy, Ruth Bader Ginsburg, Sonia Sotomayor and Elena Kagan. Chief Justice John G. Roberts Jr. and Justices Clarence Thomas and Samuel A. Alito Jr. dissented. The decision concerned two parts of a Texas law that imposes strict requirements on abortion providers. It was passed by the Republican-dominated Texas Legislature and signed into law in July 2013 by Rick Perry, the governor at the time.
Read the rest of the story HERE: