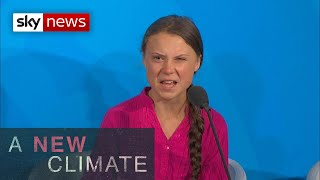 In full: Climate activist Greta Thunberg rebukes world leaders | A New Climate The teenager reprimanded those who she accused of ignoring science and being too slow in their approach to tackle climate change. Watch her statement in full ...
(Image by YouTube, Channel: Sky News)   Details   DMCA

By casting Thunberg as little more than a puppet of her parents and climate activists (as satire site Babylon Bee put it, “Marionette Strings Clearly Visible During Greta Thunberg Testimony”) these authors can discredit Thunberg as a pawn, without agency, for a group of manipulative, Machiavellian adult activists.