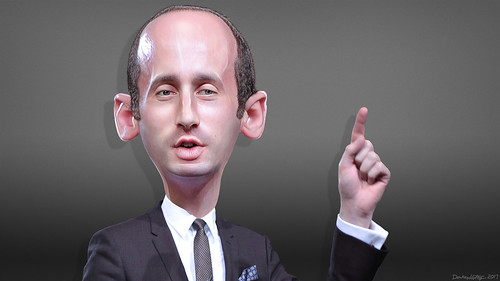 "Because of the power Miller wields in Trump’s administration, Americans should be terrified by the casual way that Stephen Mille shares racist content &  speaks the language of white nationalists in emails to people he apparently considered fellow travelers,”  said Michael Edison Hayden, senior investigative reporter for Hatewatch -- the arm of The Southern Poverty Law Center that published an investigative report re; 900 messages Miller sent to Breitbart editors -- of which 80% “relate to or appear on threads relating to the subjects of race or immigration.”  “It’s clear that he believes people of color are a danger to our country & should not be allowed in." The White House P.S. was "unaware of the contents of Hatewatch’s report" and then attempted to discredit the Southern Poverty Law Center, as. They are a discredited organization beneath public discussion."Pure Orwellian.

STAY IN THE KNOW
If you've enjoyed this, sign up for our daily or weekly newsletter to get lots of great progressive content.
Series: "UTTER CONTEMPT"

Other Series: View All 479 Articles in "FRAUD & Mendacity."

Other Series: View All 482 Articles in "Dangerous"

Other Series: View All 756 Articles in "Charlatans & Liars"

Other Series: View All 64 Articles in "White supremacy, racism rise of hate"

Other Series: View All 654 Articles in "wrecking Ball"