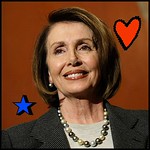 This is too delicious. I’ll begin by stressing how much of a disaster the Trump shutdown has been for the GOP. Donald Trump has achieved a record low approval rating, and has managed to drag the entire party down a whopping eight percentage points. Every Democrat running for president has a lead over Trump—in the Midwestern states. In other words, 2020 is likely to bring a substantial regime change...So the wall is never going to happen either way, but Dems may get the power to build what we want, and we’ll have the GOP to thank for it. ..My goodness, Trump was right.  I am getting tired of all the winning.