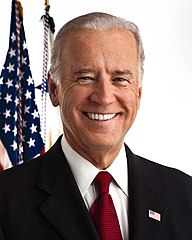 Joe Biden
(Image by (From Wikimedia) Andrew Cutraro, White House photographer., Author: Andrew Cutraro, White House photographer.)   Details   Source   DMCA
Vice President Joe Biden is still very much considering a bid for the White House, people close to Biden say, and will make a final decision at the end of the summer, targeted for September. The Iowa caucuses are scheduled for early February, meaning Biden would have roughly four months to barnstorm the first-in-the-nation state before the contest turned to New Hampshire. The Wall Street Journal reported last month that Biden’s late son, Beau Biden, who the vice president has called 'my soul,' had urged him to run for president before he died. His son Hunter has also encouraged him to enter the race.
Read the rest of the story HERE: