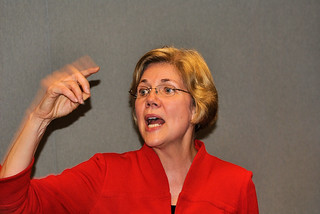 Elizabeth Warren
(Image by mdfriendofhillary)   Details   DMCA
While Warren will be a great anti-Trump surrogate for Clinton — maybe the best Clinton will have — she’s not going to be on the ticket. Sorry to deliver the bad news. There are a few reasons for this. The first is that Clinton and Warren aren’t close or even particularly friendly, and personal rapport is a key part of an effective working relationship between the president and vice president, as Clinton surely understands. Warren would come to the office with her own agenda on economic affairs — an agenda more aggressively liberal than Clinton’s, particularly when it comes to how the government should deal with Wall Street. Warren would also bring her own constituency, which could make her an unwanted headache for Clinton, who like all presidents would want a vice president who has no goal other than advancing the president’s goals.
Read the rest of the story HERE: