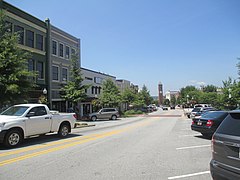 Karen Martin is a Tea Party organizer in Spartanburg; February 29, she’ll vote for Bernie in the SC Democratic primary. Some Republicans have been boosting Sanders to encourage division; Martin said her vote makes a different point.

She and other members of the Tea Party movement in SC want to end the state’s open primary system, which they believe leads to excessively moderate candidates breaking through. “We’re not necessarily looking to disrupt any additional things. We really don’t care who comes out on top.”

Crossover voting isn’t new. With open primaries in more than 20 states, crossover voting has been a part of primary politics for years. In fact, it was in South Carolina (and Michigan) two decades ago that hundreds of Democrats switched affiliations to vote for then-presidential candidate John McCain, an effort the Bush campaign then used against McCain.