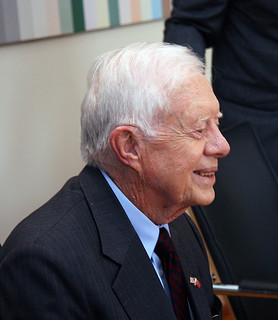 Jimmy Carter
(Image by Utenriksdept)   Details   DMCA
According to the Jewish Telegraphic Agency, Rabbi Benjamin Blech writes that there are those already proclaiming with prophetic certainty that Jimmy Carter is being punished by God for his sins against Israel and the Jewish people. “And with that smug analysis of heavenly justice these false prophets have unwittingly besmirched millions of righteous and God-fearing people who similarly find themselves suffering from incurable diseases and facing painful deaths,” he wrote.
Read the rest of the story HERE: