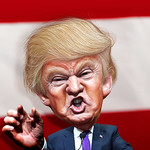 Donald Trump - Caricature
(Image by DonkeyHotey)   Details   DMCA
The formal term for Sociopath is "narcissistic personality disorder," defined by the Mayo Clinic as "a mental condition in which people have an inflated sense of their own importance, a deep need for excessive attention and admiration, troubled relationships, and a lack of empathy for others. But behind this mask of extreme confidence lies a fragile self-esteem that's vulnerable to the slightest criticism." Sound like anybody in the news? Who knew that millions of Americans would react with shame and horror to the policy of tearing brown-skinned urchins "invading" the United States from their mother's arms? Not Donald Trump, for whom such children are equivalent to vermin "infesting" the country, like cockroaches and rats. Trump's mask is definitely slipping.
Read the rest of the story HERE: